Belated Thoughts on Peer Production and its Implications for Solidarity Economics 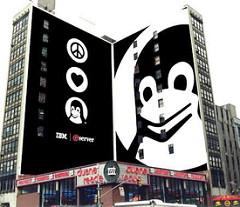 There is a fervent hope that, somehow, Peer Production is a democratizing and decentralizing model that will somehow liberate elements of the economy from the grip of Corporate Capitalism. Michael Johnson's blog entry on this site, Movements Moving Together: 12, points to two reports from workshops held in Germany, also cited on GEO here and here. This much belated response is long overdue. I leave it to you to (re)read the original material and merely share this reaction. Two threads of thought emerge: the idealism and hopium surrounding the peer production development/business model is not supported by the reality of today's Open Source Software activities and the assets in the "Digital Commons" imply none of the traditional protections and responsibilities of the thins we usually call "the commons." This Blog Entry only comments on the first. The second is set aside for some other time.

A deeper reading of the primary authors writing for the Peer to Peer Foundation reveals a vision of the Open Source Software community and its accomplishments. The vision is very promising and filled with hope for political, social, economic, and cultural transpformation based on the practice. The model, as described, rests on individual peer-groups of contributors working to a shared technical (and, implicitly, political and economic) vision to create a body of code for the "Digital Commons." The idealized outcome for this collaborative and quietly subversive activity is to free people and enterprises from the whims and weapons of capitalist corporate developers and to create a democratized and democratizing body of computer software available to all for the betterment of all.

It is a lovely vision.

Unfortunately, it is deeply Utopian and only quite thinly rooted in current actual practice. In the real world, there are two important realities. First, the vast majority of the vibrant and important Open Source Software development is funded by contributions in funding and in the dedication of paid staff by large public and private enterprises (governments and corporations). When we hear that IBM has committed another billion dollars to the development of Linux and related projects, we are hearing the voice of those who, by providing the funding, get to steer the ship. IBM is in the good company of Cisco, various departments and agencies of the US Government (the EU Government, the Israeli Government, the Russian Government, etc.), Intel, Microsoft, and a long list of others. This funding is good as it is key to the ongoing evolution of an as yet immature body of work. This funding is open to scrutiny as it is motivated by specific desires and expectations and is not actually reflective of the more global needs recognized by experts in the community.

The one concrete example I am comfortable reflecting on is the plight of the Samba Team. IBM, Cisco, and others invested heavily in extending Samba's original Microsoft-compatible file and print-sharing capabilities to take on the Windows System's Active Directory and related services. The funding was primarily in the form of hired workers assigned to the project under the leadership and guidance of a charismatic IBM project-leader who also was a contributor to the work. At some point, after the project achieved a degree of initial completion, Cisco and IBM lost interest and pulled back the commitment. Key contributors were suddenly no longer funded (employed) and the project continued as a part-time activity, pursued out of loyalty to the original vision. The longer the project goes without the original corporate commitment, the more the individual contributors become absorbed by the jobs and lives they have to adopt to feed and shelter the family.

Samba 4, the code-name for this work, suffers from various known functional defects that have been slow to be addressed as funding has been hard to organize (among other inhibitors). Roadmap items that were not completed (things postponed for future development while rudimentary capabilities were put in place) include several important performance and reliability elements that leave Samba un-competitive and incomplete. The corporate change in priorities leaves a vacuum that various smaller entities are trying to address but it is becoming clear that unless the big funders come back into the project, the Samba Team has become a romantic memory. Progress on the original objectives has been thrown back into the "gift economy".

But absent the big funders, the "gift economy" is made up of academia, people with free time (and skills) to volunteer, and  much smaller enterprises who, for various reasons, pick up the slack as best they can. This has resulted in very uneven results and much disappointment. It is often the case that some important bit of technology has languished without attention and work on it has to be restarted. Crowd-sourced funding can help but that's not a business model for maintenance and repair of mission-critical elements of the platform of choice for Enterprise server computing (real, virtual, or in the Cloud.) That means the gift economy is a mop-up operation, a default minimum community of care and capability, not the driving force in Open Source Software development. It also means that it is a symptom of government and corporate behaviors, not a driver of their future approaches.

Without a viable economic and political model that provides for the "employment" (compensation) of the Open Source Software developers at large, the Peer Production game is very much a playground of the bureaucratic-industrial complex.