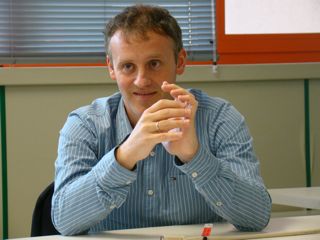 Ideas and the mentality, they promote areas indispensable for the progress of our cooperatives as are the buildings and machinery.

An important teaching so far on this tour has been the importance of innovation.  Through its Research and Development, one of the foundational legs that support the Mondragon complex of cooperatives, innovation is the hoped for result of a lot of commitment of personnel and resources.  Each of the co-ops in the Mondragon Coopertive Corporaton has an innovation committee, and a Director of Innovation.  Father Jose Arizmendiarria, Mondragon´s spiritual leader, saw it as so important that effort were made to send students to the best engineering schools around the world in hopes that students would bring back what they learned and make Mondragon competitive through innovation. 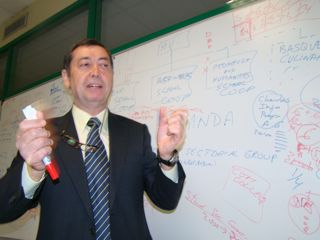 Mikel explains how the cooperatives work.

Mondragon leaders recognize the importance of education to the startup, growth, maintenance and competitiveness of its cooperatives.

"The roots of many of the companies were in the school," Dr. Jon Altuna, head of MU´s engineering school, told us at 8:30 a.m. The school is the center of the corporation's innovation.

Our usual 9 a.m. start time was moved up to accommodate his busy schedule.  The first five students started Fagor, the original manufacturing cooperative. Altuna said.   The school´s literature describes MU as ¨a University of social initiative and social vocation.¨

MU is a private-public partnership which includes its students.  The three cooperative members which comprise MU all work independently but have the same structure with three member cateories:

1.  the staff or worker members - lecturers, maintenance workers, secretaries and the dean;

2.  collaborative members - other Mondragon cooperatives and the local municipalities there are branches in other cities);

Each of these three types of members have a third of representätion on a Governing Council which makes decision for the cooperative.  However MU, a second level cooperative, only awards degrees.

"The students have the same power on the governing council," Altuna said.

Only 32% of MU´s budget is funded by student tuition.  The balance is donated by MCC cooperatives and the local municipality (30%) and money earned from research projects.  Spanish universities do not have individual endowments like U.S. universities.  Any losses would be covered by the member owners, starting first with the three cooperatives that make up MU.  Altuna said that in the 22 years he has been there, the schools have not had losses.

One of MU´s most exciting stories is its Leadership Entrepreneual Innovation program in the business school.  Taking the idea from a Finnish school, MU has a program in which 17- and 18-year old students create cooperatives in their first year of college.  Twenty six students are in the program and they form two cooperatives with 13 members each.

In the first year, each of the students are expected to earn 3,000 Euros from their work in the co-op. The amount increases each year up to 6,000 by the fourth year.  In the first year, MU helps fund the students to go to Finland to learn innovation.  Subsequent trips to learn technology and other innovations are funded by the student´s own ingenuity.  The second year they go to the Silicon Valley in California.  The third and fourth years they may go to an Asian country or to Brazil.

¨A lot of them will probably continue in the cooperative or start with another company,´¨said Altuna.  He said it is too early to know the results.

What a program!  I could just imagine the possibilities if schools in the U.S. did this.  We could probably change the world in just a few years.

The rest of the morning was spent learning about how governing councils work in MCC as Lezamiz explains the processes in more detail. 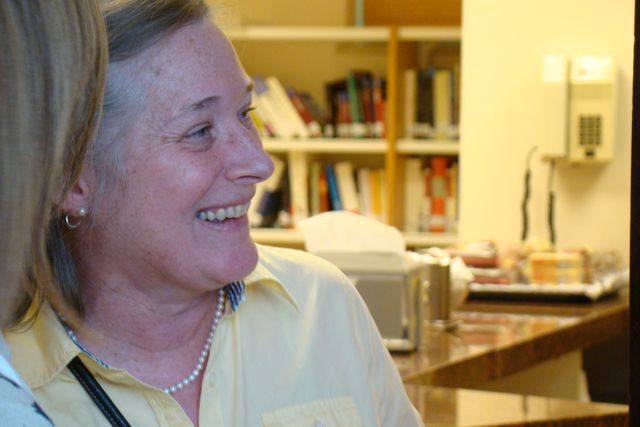 Dr. Chris Clamp catches up with us at Ikerlan.

She had to miss the morning session.

In the afternoon we visted Ikerlan, MCC´s Technological Research Centre, where Ma Eugenia Inurrieta, information and public relations person, led a presentation on their research work with universities around the world.  It was impressive to see the top of the line work of the co-op and innovative products that the work creates. 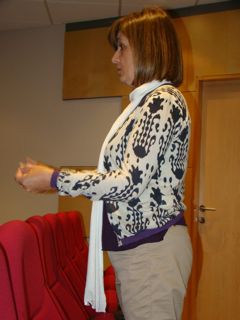 ·A book of Arizmendiarrieta quotes presented to each of us on the tour. Since we got them, we´ve been sharing our favorite quotes at evening gatherings, or talking about the importance of a particular one.

The exciting Association of Cooperative Educators conference in Cleveland July 27-30!

Bringing Cooperation to the Academy