Strange Bedfellows or Sleeping With The Enemy?

It always bums me out when I see or hear about cooperators partnering with what I consider soulless corporate entities.  I like to think that our enterprises hold themselves to a higher ethical standard than traditional corporations who explicitly state that their only goal is maximizing "shareholder value." On the other hand, I understand that co-ops, just like any other businesses, need to create revenue and that sometimes the best way to do that seems to be by partnering with a corporation that doesn't share our cooperative values.  Still, it's a dangerous path to start down.  Progressive movements have a long history of being co-opted and domesticated by the very interests they initially set out to confront.  So I think it's worth taking a good hard look at potential business or funding partners and considering not just the immediate financial benefits, but the potential long-term harms that might result from choosing an expiedient partnership over a broader solidarity. 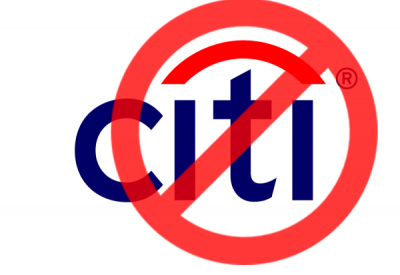 So as to lay all my cards on the table, I have a couple of specific recent examples in mind.  The first, and most troubling to me personally, was seeing Citibank's name on the recent "Cooperative Growth Ecosystem" report authored by Melissa Hoover and Hilary Abell (other reports in the same series have also borne Citi's name and logo).  Those who have been following the never-ending saga of financial fraud and chicanery that led to the 2007/08 financial crash, and which continues largely unabated to this day, will recognize Citi as one of the largest single drivers of the crisis and one of the biggest beneficiaries of Congress's bank bailouts and the Justice Dept.'s wrist-slap settlements.  Like our other "too big to fail/too big to jail" banks, none of Citi's executives have ever been held to account for overseeing and benefitting from the largest financial frauds in history.

To no one's surprise, Citibank's depredations have fallen disproportionately on the low-income and people of color.  Among the many dispicable practices engaged in by Citi, for instance, is the practice known as reverse-redlining, where a lender pushes high-cost, sub-prime (i.e. predatory) loans onto minority borrowers, regardless of their credit-worthiness.  This is an especially pernicious practice as these same banks have long been guilty of denying any credit at all to minority communities.  Now, when they finally do, the loans they provide are toxic.   Because sub-prime loans are more expensive and often contain hidden traps like like balloon payments and skyrocketing interest rates, sub-prime loans are much more likely to be foreclosed upon than "prime rate" mortgages.  Foreclosure is, of course, a highly traumatic event for the people involved -- when that trauma is multiplied by entire communities, the devastation is unimaginable.

Citi was, and likely still is, one of the main perpetrators of reverse redlining.  The following is from a lawsuit filed against Citibank by the City of Miami in 2013:

Similarly, the Center for Responsible Lending’s November 2011 report, Lost Ground, 2011:  Disparities in Mortgage Lending and Foreclosures, stated that “racial and ethnic differences in foreclosure rates persist even after accounting for differences in borrower incomes.”  Further, the Center stated it is “particularly troublesome” that minorities received riskier loans “even within [similar] credit ranges.”  For example, among borrowers having FICO scores above 660, the incidence of higher rate loans among various groups was as follows:  whites –6.2%; African-American – 21.4%; and Latino – 19.3%.

Moreover, data reported by the Bank and available through both public and private databases shows that minorities in Miami received predatory loan terms from Citi more frequently than white borrowers, regardless of creditworthiness.

Citibank was also sued by Los Angeles in 2013 for what the city attorney refered to as a "continuing pattern of discriminatory mortgage lending practices."  This is why I reacted so strongly to seeing Citi's name on a report extolling the virtues of worker cooperatives.  It is no stretch to say, as I often have, that Citi and its ilk are criminal organizations, and it is the very communities that the Cooperative Growth Ecosystem report seeks to benefit that have been the primary victims of Citi's crimes...and the effects of that criminality are on-going.  Citi may have paid some fines to the Feds, but the people who were first lured into dangerous loans and then merciliessly foreclosed upon when the bubble burst are still without their homes.  Citibank got bailed out by the Treasury and the Federal Reserve when their misdeeds led to their own implosioin -- to the tune of billions of dollars -- but the victims of their scams got nothing.

We should not be providing Public Relations cover to enterprises like Citibank.  No matter what their corporate PR people may claim, they do not have the best interests of anybody's community at heart -- their actions have proven that, time and time again.  If they seem to be supporting our efforts, we can be sure it is for their own purposes, and not for ours.  It is contingent upon us to show solidarity with the victims of financial crime, not to partner with the perpetrators (even if, like the Bumpy Johnson character in American Gangster, they occassionally give a truck load of Christmas presents away to the poor).

The second example came to my attention via an article in the Guardian about the potential partnership between SEIU and AirBnb which, thankfully, was scuttled after an outcry from SEIU membership.  In the article, however, it was mentioned that Cooperative Cleaning of New York already has a partnership with AirBnb to provide housekeeping services for hosts.  On the one hand, it's great for Cooperative Cleaning to have the kind of steady clientele that I would assume AirBnb provides them.  Unfotunatley, AirBnb, while popular with users, has a business model that is based on ignoring laws and regulations and encouraging others to do the same.  While some lipservice is paid by the company to hosts being responsible for abiding by local rules, they don't offer much direction in figuring out what those rules might be.  The result of this fast-and-loose attitude towards long-established regulations is that in many places large amounts of residential housing have been turned into AirBnb rentals, not only violating local zoning ordinances and avoiding hotel taxes and regulations, but also removing residential housing from the marketplace and thereby increasing the price of the residential housing stock.

The issues with AirBnb are not so stark as with Citibank, but they are there nonetheless.  So called "on-line platform" companies like Uber, Lyft and AirBnb are based on blatantly violating regulations in their respective industries (transportation and lodging), while using the existance of an on-line interface (a smartphone app or website) to obfuscate what business they're in.  "We're not a taxi company, we're a tech company!" says Uber, which is like a pizza delivery place claiming to be a telcom company because they take orders over the phone.  And just like Uber encourages both drivers and riders to not think twice about violating taxi regulations, AirBnb facilitates the existance of illegal hotels in a way that would be utterly transparent if it weren't for the existence of their on-line platform.

A developer could not, for instance, buy up a block of residential homes and just tear them down and replace them with a hotel. Such action would have to be approved by the local government at a minimum, and in most places would be prohibited by zoning regulations.  But that is exactly the type of thing that AirBnb is facilitating.  A friend recently travelled to New Orleans, where he booked a room through AirBnb, and was quite surprised to find upon arriving that every house in the neighborhood was owned by the same guy and every one was being rented out through the website.  A few locals had jobs as caretakers, but apart from that, the entire neighborhood of previously residential houses had been turned over to the tourists.

And the main beneficiaries of this skirting of the law are, as usual, not the small operators or people actually providing the services.  The owners of the company, who take a cut of each transaction while pushing all the risk of actually housing random strangers onto the hosts are the only ones getting rich off AirBnb.  Well, them and unscrupulous business people like whoever owns that neighborhood in NOLA.  This is just one of the reasons that news of the SEIU's possible partnership with AirBnb created such internal dissension at the union.

While I don't think that AirBnb's unethicality has yet risen to the level of Citibank's, I would hope that any co-op that partners with them or similar companies puts some good hard thought into what they are involving themselves with.  Personally, I would much rather see co-ops working with local governments to create community or user-owned platforms to compete with the Ubers and AirBnbs of the world, rather than working for the new shady-monopolists of the information age.

I don't think co-ops should reject "strange bedfellows" out of hand, but when those bedfellows are actively engaged in harming the people who we claim to be in solidarity with, that solidarity demands that we kick those bedfellows out from under the covers, so to speak.  If, however, we remain silent about the harms being caused by our strange bedfellows, while at the same time trumpeting their support for our righteous cause, we are guilty, in my estimation, of sleeping with the enemy.  Solidarity demands that we put a stop to it, ASAP.